What can we learn from the corona virus? 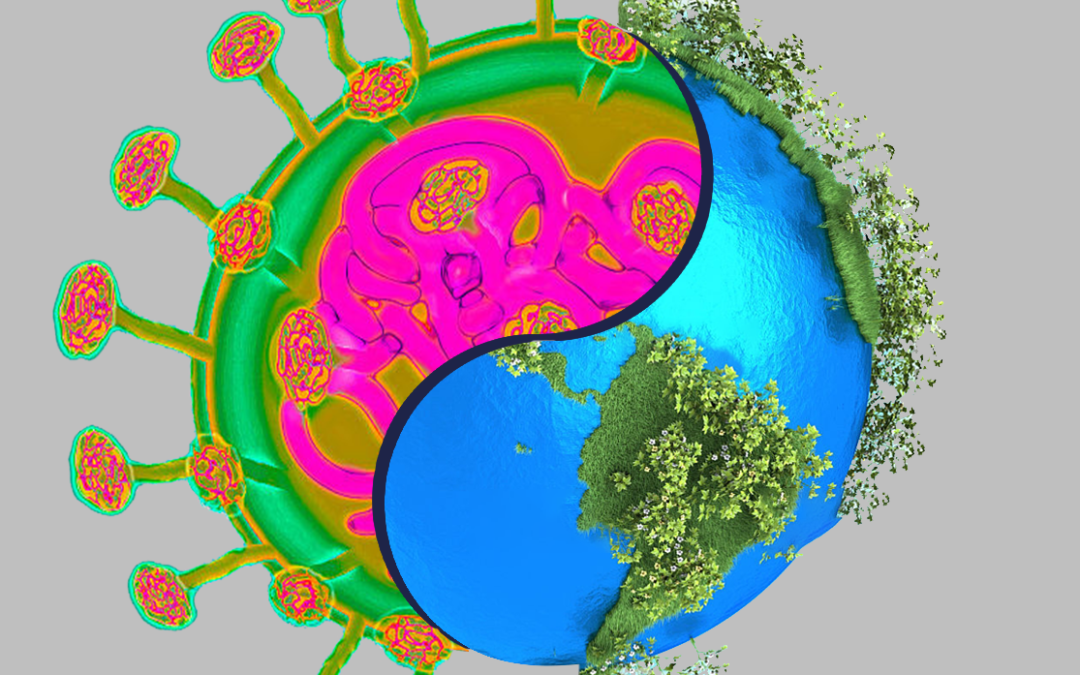 What can we learn from the Corona virus? What doors can be opened in this dire situation? Does the corona virus have benefits for the planet? The Chines word for crisis is composed of two Chinese Characters signifying “danger” and “opportunity” respectively.  There a silver lining as this is an opportunity to wake up, to change our ways, and see how it benefits the planet, our only home. Instead of only dealing with the symptoms of the Corona virus, like counting how many people are infected, closing borders closing, hoarding food, etc), we need also to understand the CAUSE of the Corona virus.
Not only to find a vaccine but also to prevent more of these epidemics in the future.
1. Factory farming and wildlife trade
Factory farming and wildlife trade should be outlawed globally.
China and Vietnam have banned the trade and consumption of wild animals, as findings reported in the Chinese media, suggest that this corona virus originated from one of Wuhan’s many live-animal markets. Over 100 different, frightened animals, kept in cramped, dirty cages were sold there for traditional medicine, food and pet trade, including wolf pups, civet cats, poultry and snakes. Many of which have been captured illegally in the wild.
Researchers first identified the potential threat of corona viruses following the 2003 SARS outbreak (also caused by a virus jumping from animals to humans).
The word has now spread in Asia that eating wild animals is dangerous, and if that rule can stick, it would be hugely beneficial to the planet.
In Africa it may even finally bring some relief to the rhinos, elephants and other #endangered animals.
2. Why we need a steady state economy
NASA released pictures last week showing how much pollution over China has cleared as a result of the slowdown. See how quick and easy reducing emissions can be to clean the air?
A slowing economy is a lower carbon economy.
Someone says the virus is causing a “quarantine of consumption”; we will have to get used to fewer possessions and travel less.
A steady state economy, or a de-growth economy that operates within Earth’s biophysical limits is a solution. And a shift to more resilient local economies, growing food near to where we live.
We cannot have a infinite growth on a finite planet, and treat the planet as an endless resource.  Climate change also often dims awareness of the extinction crisis that is accelerating on multiple fronts.
3. Travelling, and tourism
With travel significantly curtailed, carbon emissions must reduce substantially in the future as well.
If travel restriction leads to more online meetings and events rather than physical travel, it can only be a good thing.
Did you know that one cruise ship can release as much pollution as one million cars?
(https://ecohustler.com/nature/5-ways-coronavirus-could-help-humanity-survive-the-ecological-crisis/).
This virus also shows us that working remotely is possible
4. Universal Basic Income.
What about starting to tax the rich, as a very small number of people control nearly half the world’s wealth?
5. Conclusion
Economic disruption will have environmental benefits.
It almost feels as though the planet says: “You humans aren’t going to change your behaviour in time, let me do it for you.”       Or: what comes around, goes around.
The planet delivered its own, slightly brutal, but maybe effective solution.
Please check out Normal is Over The Movie, an independent documentary connecting the dots; It shows you the big picture, and offers many different solutions to reverse global decline.
You can rent the film on our website, which is a great way of supporting our work.
Waking up from this virus is real, and could be a gift in the long run, provided we unite as one or suffer more then is necessary.